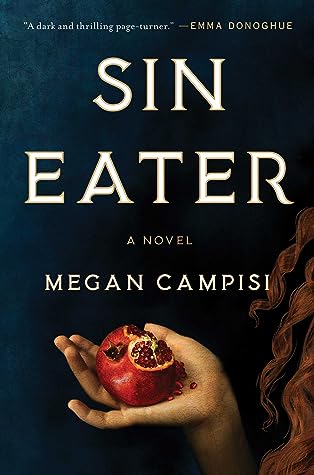 Did ever a more perfect cover exist? I think not. That, coupled with the fascinating synopsis, made me more excited than I’ve been in a while for a new book. What a phenomenal concept, right? Somehow, I’ve made nearly three decades without having ever heard of a ‘sin eater’. According to Wikipedia, “A sin-eater is a person who consumes a ritual meal in order to spiritually take on the sins of a deceased person.”, though it seems there actually isn’t a ton of information on the subject. Given that, I assume Campisi must have made up a lot of the practices, as well as creating from scratch the experiences a sin eater might have had. Though imagined (i.e. fantasy), the world feels vivid, almost historical, in its depiction. But it is the unique plot of this novel that really sets it apart from other novels and makes it a worthwhile read. Where it fails to forge a connection with/between characters– due to the difficulty inherent in writing a story in which the protagonist cannot converse with others– it succeeds in its originality and storyline. I think this is one of those rare instances where the movie adaptation would be better than the book, because this world is so visceral and visual.

Comparing this book to Alice in Wonderland makes absolutely no sense to me. Handmaid’s Tale, I sort of get in that it’s dystopian (though it could be described as such, rather than compared to a book to which it bears little resemblance). I would describe this as dystopian YA-meets-historical fiction, as its tone is more like historical fiction than fantasy. The dark content may make it a tough read for strictly-YA readers, so perhaps this would be best for those more advanced readers who have graduated from Hunger Games, The Selection, etc., but aren’t yet ready for (or interested in) more literary works.