Having not read The Other Woman, Sandie Jones was a new author to me, and this book didn’t disappoint. I went in completely blind, only scanning the synopsis, so I was expecting your more typical over-dramatized psychological thriller. Is the half sister who she says she is? Is she out for some kind of vengeance? Though those questions do come up, this is truly a domestic thriller, by which I mean that it’s far quieter than its genre-siblings.
For me, what tipped the scales from a 4-star to a 3-star is that I often found myself lost in who is who re: Lauren and Kate. While they’re “complete opposites”, they didn’t have distinct voices, so I kept having to rely on context clues: which one has the family, which one is struggling with fertility? It would’ve worked better for me had they been differentiated by their voices.
The end of the book is also a bit cacophonous, which stands in stark contrast to everything before it. It’s so rooted in reality and then, I assume to give us some meaty plot twists, there is a whole potential fake abortion plot that comes from out of nowhere, as well as calling into question the DNA test, which makes no sense. As the author tries to fake us out, so that we don’t see the rather-obvious answer, it all gets rather convoluted.
Overall, I would recommend this book to anyone who is looking for a softer thriller, as it is an enjoyable read and it doesn’t have much in the way of gruesome details or violence, which is a nice break from the expected. I’d give Ashley Croft’s The Love Solution a 2.5, as it really was just okay, but after having looked at the other reviews, I decided to round up to 3 stars (on Goodreads) because I don’t believe a book’s quality should be assessed based on the moral judgements of its readers. It’s one thing to say a book is poorly written, constructed, plotted, or its characters are one dimensional, etc. But to say ‘this book is not good because I disagree with the morality of the characters, choosing to use a love potion’, is silly. Not that I think the Love Bug story points add to the quality of the book as a whole; in fact, I actually think the book could’ve done without that bit entirely, and would’ve perhaps been stronger, as that whole back and forth was ultimately a bit pointless, and the characters and relationships were interesting enough on their own. Also, characters are meant to be flawed– and sure, maybe *you* are the kind of person who maintains utmost integrity, even in the face of heartbreak, and you would never succumb to your own desperate misery. But I’m not going to pretend for one single second that I couldn’t be led down a ‘dark path’, or that I’d label someone who did resort to something like a magic love pill as a ‘bad person’. Yeah, there are ethical issues with that– that’s precisely why we have Science Fiction (or, in this case, Romantic Comedies with Sci-Fi-Light elements), to extrapolate and tease out the potential pitfalls of such medical and technological advancements.

Outside of all that, The Love Solution is truly mediocre. It’s the kind of thing you pick up because you’ve exhausted everything other option, or because there’s a secondhand copy on sale for $1.99. Funny enough, after I wrote this review, I went to pull the Amazon link and it is indeed being offered for… $1.99. At least the publisher is aware what they have here, and they’re not price gouging their customers. It feels like it has been churned out, a bottom of the barrel tale that the author spruced up so she could make that next mortgage payment. It all feels very dated, in its language and domesticity, as if it was either created twenty years ago, or else is intended for an audience of senior citizens who prefer a more tame story. And, by the way, I don’t mean that as a cut down; I think it could be successful in assisted living book circles, and there’s not a ton geared towards that demographic. 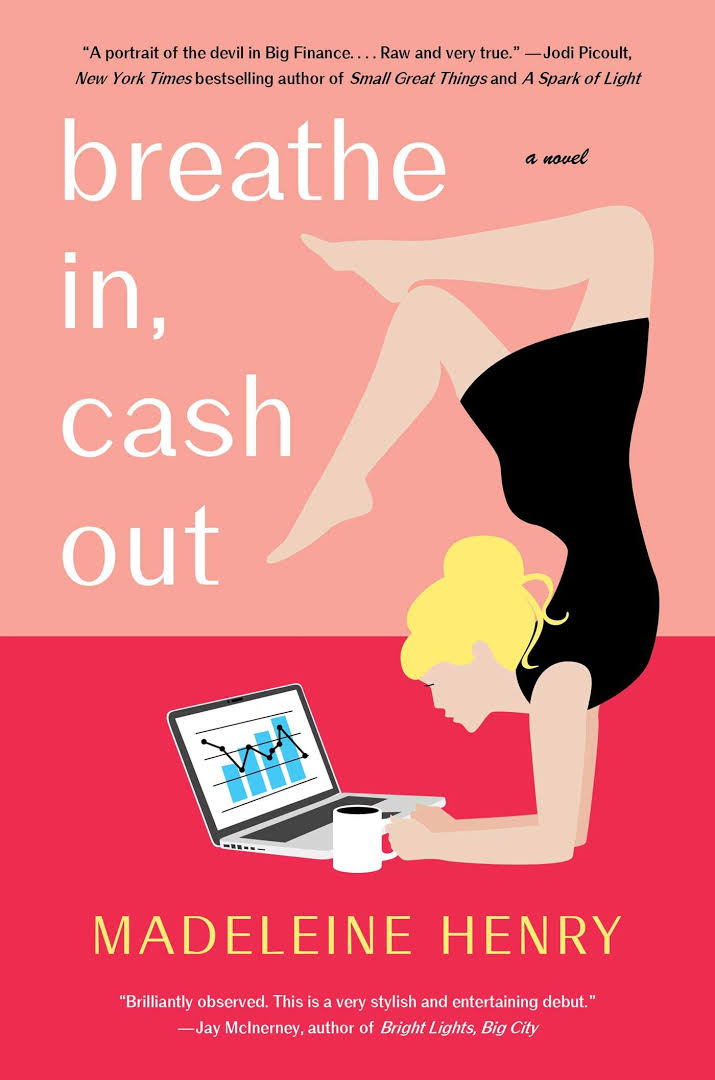 Whoa, okay, so it’s been a while since I’ve posted here on the blog. This has been primarily due to an intense six months of work, but is also owing to a lack in solid, new releases. I’ve been going back through authors who I already like, for tried and true stories (i.e. I’ve read everything Taylor Jenkins Reid has written). But I’m back, friends.  And the best way to come back? Sharing a brand new author, with a brand new book– one that I actually liked! WHAT!? Yes. I have nothing snarky to say. Well.. Maybe a little something to the effect of “don’t look up the author’s own story or Instagram account before you read this”, but overall, I’d say this should go to the top of your TBR beach reads pile.

Let’s start with this: the PR department over at Atria clearly knows me a little too well, as Breathe In, Cash Out is pretty much tailored for me. As much as I relish in the cleverness and beautiful use of language in highbrow literary fiction, there’s really nothing like a solid piece of chick lit to get me excited. I know, I know, “chick lit” is no longer a phrase we use, but I say it in an entirely non-pejorative, proud of my not-so-dirty and not-so-secretive, way. That’s not to say that the genre is without its problems– it is, and I’d say they’re mostly of a qualitative nature; many of the offerings wind up being of the mediocre mommy porn variety, and let’s just say that’s not helping. But, okay, let’s look specifically at Madeleine Henry’s debut novel, about a young woman on Wall Street whose ambitions involve a different kind of upward (and downward, as in, ‘dog’) mobility than most of her peers. My enjoyment of this novel is likely owing to narcissistic tendencies, as I’m also an avid practitioner of yoga, with Ivy League credentials, working in a male-dominated field, dating a finance bro. The story hits home, yes, but I think there’s an informative component that sets it apart from may other offerings in the genre. If you come to this with a finance background, I would expect you’d pick up some yogic knowledge and perhaps some desire to self evaluate; if you come to this with a yoga background, you’ll likely learn a bit about finance, and the cutthroat atmosphere of working at the bottom rung of banking. In addition, the writing has a great bite to it, as if the author expects the reader to keep up without coddling.

Pre-Order Breathe In, Cash Out on Amazon here.